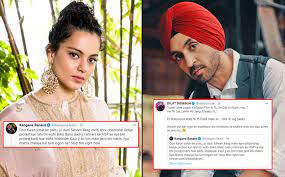 No stranger to controversy, or social media spats, Manikarnika star Kangana Ranaut was in the eye of the storm on Thursday. Kangana faced netizen’s wrath for posting derogatory comments about an old woman from Punjab, who is participating in the on-going farmers’ protests. However, it broke into a full-fledged Twitter war on Thursday when Udta Punjab actor Diljit Dosanjh criticised Kangana for misidentifying the elderly Sikh woman, who had joined the farmers’ protest, as Bilkis Bano of Shaheen Bagh. While Diljit was trying to make her understand that she was at fault, Kangana called him ‘Karan Johar’s pet’ and the war of words got murkier. Many celebrities came in support of the Punjabi singer-actor, sharing their views over the issue.

Singer Mika Singh admitted being ‘wrong’ about Kangana, he tweeted, “I used to have immense respect for @KanganaTeam, I even tweeted in support when her office was demolished. I now think I was wrong, Kangana being a woman you should show the old lady some respect. If you have any etiquette then apologise. Shame on you.”

Singer-actors Gippy Grewal, Gurdas Maan and Jasbir Jassi have also come forward and showed their support towards the protesting farmers. While Gippy tweeted, “No farmers, no food,” standing with Diljit in Kangana-Diljit spat in his live Facebook video, Gurdas Maan reiterated that India exists only because its farmers exist. He also prayed for their well-being. “Kisaan hai, teh Hindustaan hai. Sarbat Da bhala hovey,” he wrote. On the other hand, Jasbir Jassi shared a picture of an Army personnel deployed in the national capital to maintain law and order hitting a protesting farmer with a baton.

Meanwhile, a plea was filed against Kangana Ranaut in Bombay HC on Thursday (December 3) evening for getting her Twitter account suspended for “spreading continuous hatred, disharmony in the country and attempting to divide the country with her extremist tweets.” On the other hand, Delhi Gurudwara Management Committee member has also sent a legal notice to Kangana over her tweet allegedly targeting farmers. Before that, a legal notice was sent to the actress last week (November 30) by advocate Harkam Singh of Punjab’s Zirakpur. In the notice, he gave Kangana seven days to issue an apology failing which a defamation case will be pursued. — TNS