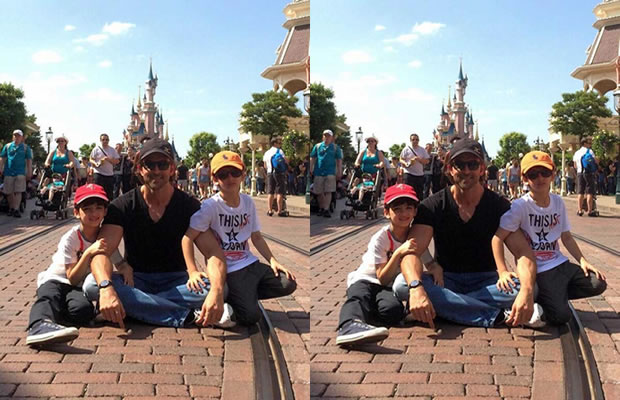 We were heartbroken when we heard that Bollywood heartthrob Hrithik Roshan has approached the courts to finally start divorce proceedings against his estranged wife, Suzanne Roshan. Our hearts melted for the couple’s little baby boys who would witness their parents separate for good. But times have changed!

Don’t worry my friends, life has a way of teaching people on its own, wounds heal and a ray of sunshine shines through. This is evident as the handsome Grrek Adonis Hrithik is having a “funtime” vacation with his two boys Hrehaan and Hrehaan, at Disneyland, though Suzanne is missing from the picture!

People spotted the trio, Hrithik, Hredaan and Hrehaan, at the airport in Mumbai on June 6th. The Krrish 3 star head out to Disneyland to have some fun time in Disneyland. He posed for a picture with his two bundles of joy wearing a black t-shirt and jeans. There was the Disneyland castle flashing in the background as he sat on the road and got a picture clicked with his thrilled handsome kiddos.

Hrithik couldn’t resist posting a tweet that stated, “On the road less traveled u must sometimes stop and take a picture.” Reading his tweet, Nargis Fakhri couldn’t resist herself and scribbled away a comment at his holidaying “OMG are you like at disneyland or something! i wana go! =) what fun!”. Roshan replied back with his fabulous wit stating: “Yeah. Careful if ur coming tho, People may mistake u as the main park attraction!! Safety not guaranteed!”

Hrithik has engrossed himself in “Bang Bang” his action film, which was held up due to his surgery. Hrithik has given bulk dates to the production house as the project needs to be completed at the earliest. He has Katrina Kaif starring opposite him in “Bang Bang”.

Hrithik Roshan seems to be bouncing back with the same force and has also decided to team up with his “Jodha Akbar” director Ashutosh Gowariker after a period of about 5 years and is giving his nod for Gowariker’s ‘Mohenjo Daro’. But he is traipsing around joyfully at the moment in the fun rides at Disneyland with his sonny boys!