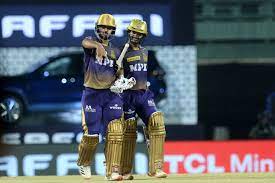 Chasing 156, KKR produced a solid batting effort with Tripathi (74 not out off 42 balls) and Iyer (53 off 30 balls) putting on 88 runs for the second wicket to take the side home in 15.1 overs. Jasprit Bumrah picked up all the three wickets for MI, giving away 43 runs from his four overs.

Earlier, Mumbai Indians (MI) scored 155/6 batting first. The defending champions got off to a flyer with Rohit Sharma and Quinton de Kock scoring freely on their ways to 33 and 55 respectively. But after they were dismissed, KKR bowlers stifled the MI batsmen with just 75 runs added in the last 10 overs. Lockie Ferguson was particularly impressive ending his spell with 2/27.

ana finishes it off in style with a reverse sweep. That is what is called a statement of intent. KKR just took 15.1 overs to reach the target and they win by 7 wickets. MI vs KKR has been one of the lopsided battle in the IPL where MI has beaten KKR 22 out of 28 times they encountered. But today KKR came strong and had a thumping victory over MI. With this win, Kolkata move to 4th position, and Mumbai remain in the bottom half.

To hear Krishnamafchari Srikkanth on commentary for T20 games is almost like watching him bat. A non-stop stream-of-consciousness jabber, utter delight in seeing big hits, a constant stream of advise to the batsmen or the bowler, and an unbridled use of colloquial Tamil. “Udaathara, Pottu Saathu machan!” (Don’t let it go, slam ’em mate!) was his advice to Ishan Kishan. He has a host of typical Cheeka-isms: Mooku mela raja (On top of the nose, Raja!) Is a miscue that sends the ball straight up for a dolly of a catch to the fielder. Dil-ku-Duddu! (Cash for guts!) is his desperate plea to batsmen to not to muck around but to blast that white ball. Dil-ku-duddu machi .. adura-adura (hit hit). He takes the mickey off other commentators and also is sporting enough to take some back as well. Let’s end with a story from when he was a selector of Tamil Nadu Ranji team. He asks a debutant his batting strategy and the nervous batter told him that he will defend compactly and respect the attack. Srikkanth, so goes the story, wore an incredulous look and snorted “Defend aa? Dei! Poi adi-ra! (Just go and whack)”!