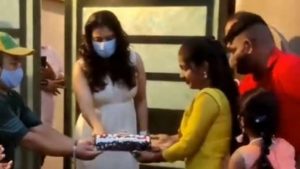 “Bubbly” Kajol has been famous for her loud boisterous laughter, and fun banter with her fans. But this time, netizens are angry with her. In fact, they turned around and called Kajol a “ghamandi aurat” and that too on her birthday. But, what happened?

Netizens are very angry with Kajol and called her a “ghamandi aurat” because she refused to eat a cake piece offered by her fans, on her birthday. Her behavior has left her fans angry and disappointed. They even called the “DDLJ” actor full of attitude and arrogance.

On August 5th, Kajol celebrated her birthday, and everyone was left touched by the sweet, tender note penned by Ajay Devgn on Instagram. The actor obliged her fans by coming out of her house but refused to eat the cake presented by them. The audience is disappointed because she didn’t appreciate or acknowledge their efforts.

But, the fact is Kajol did cut the cake and click pictures with them as they sang the birthday jingle for her. But she stepped back inside the gates when the cake was offered to her. The tongues are wagging, audiences are furious but some fans still have sympathy. She would have crossed the safety norms if she had removed her mask. Don’t blame her people! After all, Covid-19 has celebrities struggling as well!