“Krrish 4” is just around the corner guys, we read about this today, on the 15th birth anniversary of Krrish 3.

We have been waiting for the announcement for ages and finally, Hrithik’s Instagram handle had some pulsating news for us. The sequel to the superhero franchise will be here soon for us. “Krrish 4” is just around the corner guys, we read about this today, on the 15th birth anniversary of Krrish 3. Get ready for some vigorous action!

The black-masked character wooed women, men, and kids from all over in Krrish 3. Go back fifteen years and recollect the flowing leather coat and famous black superhero mask of Krrish in “Krrish 3”. Once again we felt the same thrilling excitement on reading Hrithik’s Instagram handle on the 15th anniversary of Krrish 3. “The past is done. Let’s see what the future brings. Krrish4,” said Roshan junior.

Hrithik has officially announced his next superhero installment “Krrish 4” for his fans. A handsome superhero jumping on top of cars and buildings had the audiences plunked stunned to silence in their seats. When the handsome and fit Hrithik revealed his face by removing the mask in “Krrish 3”, the audiences had been delighted beyond words. Now he plans to show us his other dark ominous side- his alter ego. Stay tuned to this space for more! 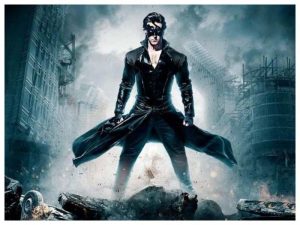