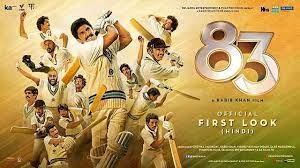 It’s been a long time since we have seen Bollywood’s power bank Ranveer Singh on the silver screen. The actor has several interesting films in his kitty like Kabir Khan’s directorial 83, Rohit Shetty’s Cirkus and Yash Raj Films’ upcoming venture Jayeshbhai Jordaar. He will also be seen in Sooryavanshi, a part of Rohit Shetty’s cop-universe, which will introduce Akshay Kumar as the titular character.

Ranveer recently celebrated 10 years in the film industry. On Instagram, he shared a video, which traced his journey from being a newbie to becoming the heartthrob of the nation. Sharing the video, the actor wrote, “I only see possibilities. To defy definition. To transcend genres and empower a new generation to see their own possibilities and write their own stories.”

Apart from ruling the box office, Ranveer Singh launched his passion project IncInk, which completed two years this year. The actor, who turned an entrepreneur, found the label with the filmmaker Navzar Eranee. Under his label, the actor gave space to many hip-hop artists. Interestingly, the passion project was launched after the actor featured in Gully Boy, a Zoya Akhtar directorial, inspired by the lives of Indian street rappers Divine and Naezy. The actor had earlier mentioned he is proud that IncInk has “become a creative platform for budding, talented musicians and is empowering them to shine bright.”

Kabir Khan directorial 83 chronicles India’s first World Cup win under the captaincy of Kapil Dev in 1983. The film stars Ranveer Singh, Deepika Padukone, Pankaj Tripathi, Saqib Saleem and Harrdy Sandhu among others. Ranveer will be seen playing the role of Kapil Dev. Originally, the sports drama was scheduled to hit theatres on April 10, 2020, but got delayed due to the coronavirus-induced nationwide lockdown. However, 83 will now release on June 4, 2021. The movie will release in Hindi, Tamil, Telugu, Kannada and Malayalam.

The film, directed by debutante director Divyang, marks the reunion of Ranveer Singh and filmmaker Maneesh Sharma, who gave the actor his first big break with 2010’s Band Baaja Baaraat. Set in Gujarat, the film will see Ranveer playing the role of a Gujarati for the first time. It marks the Bollywood debut of Arjun Reddy fame Shalini Pandey. Jayeshbhai Jordaar, which also features Boman Irani and Ratna Pathak Shah, is scheduled for an August 21, 2021 release.