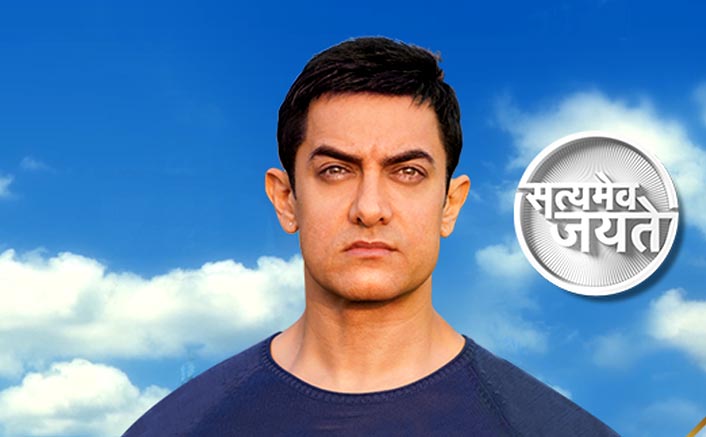 Yesterday saw the launch of the theme song of Aamir Khan’s TV debut ‘Satyamev Jayate’, the most eagerly awaited show of the television history.

13 episodes 13 songs
The title song was unveiled by Aamir at a press conference but the ‘Perfectionist’ Khan refused to divulge any details about his show’s content.

Aamir officially announced that the show will be aired from May 6 every Sunday at 11 am.

While giving some inputs about the musical aspects of the show the superstar stated, “The show will have a song for all 13 episodes. Songs have a great connect and touch everyone.”

When the Ace Khan was quizzed about his experience while shooting songs all over the country, he disclosed, “It was an enriching experience to meet all kinds of people. I cry easily, so when things touched my heart, I cried. And when I was inspired and happy, I cried.”

Satyamev Jayate’s theme song is composed by Ram Sampat, who has worked with Aamir earlier in the films like ‘Talaash’ and ‘Delhi Belly’ and the lyrics are by Prasoon Joshi who has been working with Aamir since ‘Rang De Basanti’ days.

Amir explained, “When I asked for the song to be not nationalistic but romantic, they were taken aback. The song is about the love every Indian has for our country. I want every Indian to connect with the song.

‘Satyamev Jayate’ to air on 9 channels
‘Satyamev Jayate’ will be dubbed in four southern languages and aired on eight channels owned by Star Network and on Doordarshan, which is going to be the USP for the serial, revealed the actor.

Talking about the TRP, Aamir elucidated, “I am always scared to walk a new path and be different. I have no idea how TRPs are calculated. This show is more about connecting with audiences than the TRPs.”

“I have flaws and I try to keep changing. Earlier when someone would hurt me, I’d get emotional, shut myself from that person, hold a grudge and get judgmental. But I realized that just because my perspective doesn’t match with someone, it doesn’t mean I should break the relationship. It is tough to maintain relationships.” explained Aamir when quizzed about the things he want to change in himself.