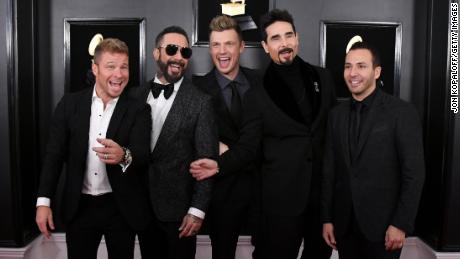 Located between Boyz II Men and the Osmonds, the band’s members, Brian Littrell, A.J. McLean, Howie Dorough, Nick Carter, Kevin Richardson along with the band’s producer Max Martin, families and fans were present at occasion to show their support.

The band lay down around their star, surrounded by many screaming fans, to get their photograph by their newly-placed star. At the joyous occasion the band members were overwhelmed with joy.

A.J. said, “I love you guys. And aside from my wedding day and the birth of my daughter, this is hands-down the best day of my life.”

The teary-eyed Nick added, “I never ever imagined in a million years that we would be a part of this.” Brian jokingly told the crowd, “I worked my entire life to never be walked on, but I’m OK with this one.”

Kevin concluded, “What a beautiful day. What another beautiful way to celebrate 20 years together.”

Band formed in 1993
Formed in 1993 in Orlando, Florida Nick, AJ and Howie originally made up the original members, later they added Kevin who brought on his cousin Brian. Now, the Backstreet Boys, 130 million records sold and 20 years later are back.

Kevin who took a six year hiatus from the group after the release and tour of their NEVER GONE album has returned to the fold. Now all five members are anticipating a new album in the coming months, worldwide tour beginning next month in China and a documentary in 2014. 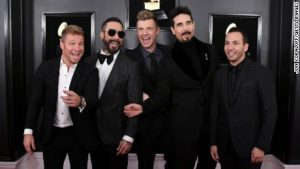 The star isn’t the only exciting thing happening with the boys right now, though. They’re putting the final touches on their first album since Kevin Richardson rejoined the group.

Celebrations are on in the band members personal lives as well. Richardson and wife Kristin are expecting their second child. Band mates A.J. McLean and Howie Dorough also welcomed new babies — a daughter for McLean and a son for Dorough. Even Carter, the baby of the group, is about to get married.

Congratulations to the BSB for all their accomplishments! Here’s to another 20 years!!