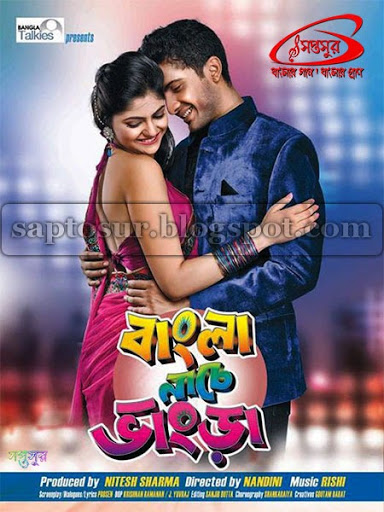 Bangla Talkies is headed by Nitesh Sharma and his wife Nandini. They have the credit of producing films like “Bish”, “Clerk”, “Aamra” and National Award winning “Padakshep”. They are now ready with a complete in-house package reflecting their own experience and culture. Nitesh is Punjabi and Nandini is Bengali. They have lived through the hassles and benefits of a cross culture marriage amalgamation process. Nitesh has penned down the story of this movie and Nandini is the director. Although this is the first feature film as a director for Nandini, she is well versed with the trade due to her long association with film and television industry.

The lead roles are played by debutants Sayan and Pallavi. Sayan is from Bengal and Pallavi hails from Delhi. The couple falls in love in college which is resisted by their parents. The girl, Pallavi is banished to her native place in Punjab. Hero then moves to Punjab in search of the girl. Through immense hardship he could reach her and establish contact. Huge action and emotion follow in the green fields of Punjab. The intensity of love finally melts the hearts of the rough and tough Punjabis and the couple are united. Kharaj Mukherjee and Rajesh Sharma have played key roles in the movie. Several actors from Punjab will also be seen in the movie.

Half of the film is shot in Punjab mostly in villages about 25km from Pathankot. The scenic beauty of Punjab and Bengal is captured artistically. There are several good songs in the film composed by Rishi Chanda, Arindam Chatterjee and Raja Narayan Deb besides Pakistani band Ragaboyz. Ragaboyz also appear in a music sequence in the movie. This is the first time when a Pakistani band is singing in a Bengali movie.

Scheduled for release on 23rd August, most difficult part for Nitesh would be to establish the two new lead pair. The risk is high as an established hero is created once in a few years. The story of this movie is simple. Ganesh Talkies worked on similar topic with Bengali and Marwari couple and was a disaster in box office. Movie lovers are yet to identify the difference which would attract them to the hall. Bangla Talkies would surely have their strategies in place for a grand release.