Deepika Padukone and Hrithik Roshan are 'ready for takeoff' as they begin Fighter shoot. 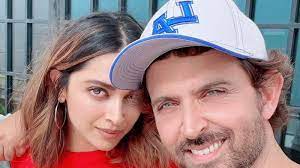 Actor Hrithik Roshan has shared a bunch of new pictures with Deepika Padukone as they began work on their upcoming movie, Fighter. This is the first movie together.

In his selfie with Deepika Padukone, Hritik Roshan is seen posing with his arm around her shoulders. She is seen in a red top while Hrithik is seen wearing a blue and white cap. “The gang is ready for takeoff. #Fighter,” Hrithik captioned his post.

The stars’ fans showered them with good wishes and compliments. “Have a terrific working time all together,” wrote one. “All the best. Expecting a cracker of a film,” wrote another.

Fighter will be made by War director Siddharth Anand. Announcing the movie, Hrithik had said, “Presenting a glimpse of the MARFLIX vision as #Fighter! Looking forward to my first flight alongside the exceptional @deepikapadukone. All buckled up for this #SiddharthAnand joyride.” 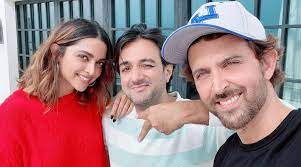 Also sharing the teaser, Deepika wrote in the caption, “Dreams really do come true… #SiddharthAnand #Marflix #Fighter @iHrithik.” Talking about the film, Siddharth Anand had said, “This is definitely one of the most exciting moments of my life to bring together two of my favourite stars, Hrithik and Deepika, for the first time to the Indian and global audience. I am thrilled to begin the journey of MARFLIX, a production house dedicated to action film making in India. I start this journey of Marflix along with my life partner Mamta Anand. Starting MARFLIX with Hrithik is special as he is someone who has seen me even working as an AD, then as director on two films and now I am not just his director but I’m also starting my production house with him.”

He added, “Our vision for MARFLIX is to create THE action film production house of India. If you think of action films in India, you should think MARFLIX. That’s our endeavour and we will work hard to get there. Still early days, but the journey has begun.”