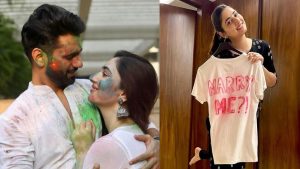 Disha Parmar turns 26 years and Rahul Vaidya, Bigg Boss 14 runner-up, proposes marriage to her on National Television. The singer went down on his knees, flaunting a “Marry Me” white t-shirt scribbled with Disha’s name over it. Rahul, once again, shows off videos and pictures of Disha holding up the same t-Shirt, blowing a kiss on Instagram.

He, now, plans to frame the T-shirt to seize the moment forever. The couple has been frequently in the news for quite some time because of their “Pandemic-affected” marriage plans.  On Disha’s 26th birthday, an emotionally-spent Rahul had worn a white t-shirt in front of all the other big boss contestants, scribbled with Disha’s name and “Marry me” message.

The singer once again reminds his fans of the loving moment by sharing Disha’s pictures, holding the t-shirt up with a suggestive pout. In the caption, Rahul comments -“A T-shirt I can never ever forget… had proposed to my girl using this.. Gonna frame it! (heart emoticon) @dishaparmar.” Big Boss 14 would have been incomplete without Disha Parmar and Rahul Vaidya’s tender love story. The latter had expressed his love for the actress on National television for the first time, through the Bigg Boss 14 platform.