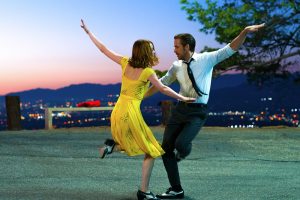 Both romantic comedy-drama and homage to the golden age of the Hollywood musical, writer-director Damien Chazelle’s La La Land is rooted in the present, yet imbued with a timeless quality.

As it opens, Sebastian (Ryan Gosling) and Mia (Emma Stone) meet confrontationally in a Los Angeles traffic jam and go their separate ways, not realizing how much they have in common. They are two among thousands of young L.A. denizens struggling to make it in showbiz. He’s a frustrated jazz pianist, talented but committed to a traditional style that can’t earn him a living. She’s a barista and wannabe actress who can’t get beyond soul-crushing auditions and an alienating Hollywood scene.

They cross paths again when Mia is lured into a restaurant by an affecting musical performance. She finds Sebastian at the keys, submerged in a free-form jazz piece that’s too off-script for his boss (J.K. Simmons). She wants to compliment him but he brushes her off. It takes one more chance meeting for a mutual attraction to emerge from beneath their bickering repartee, and it’s brought to life in the song-and-dance number “A Lovely Night.” Romance blooms but gets complicated as R&B singer Keith (John Legend) persuades Sebastian to join his touring band the Messengers, and Mia makes one last play to jump-start her thespian dream. She and Sebastian come to realize that given the demands of their career goals and budding relationship, something’s got to give.

Chazelle, 30 at the time of filming, proved to be one of the industry’s most exciting young talents with 2014’s Academy Award-winning Whiplash (shot by Sharone Meir) — also a music-themed project, though in essence a psychological drama. For La La Land he teamed with director of photography Linus Sandgren, FSF, appreciating the latter’s work with director David O. Russell on American Hustle and Joy. They hit it off in their initial meeting.

“Damien is a strong storyteller, and he’s very clear when he describes his vision,” recalls Sandgren on the line from London, where he is shooting Lasse Hallström’s period fantasy The Nutcracker. “[Damien] is also a director with a big, romantic heart. I especially fell for his sincere love for classic cinema filmmaking, and for the original music for the film [by Justin Hurwitz, Benj Pasek and Justin Paul] that he played for me. I was surprised by the melancholic theme, and could immediately sense how this would impact the emotions of the story and make it a very different [kind of] musical.”

In a separate interview, Chazelle says, “One of the things I love most about Linus is that he has an old soul. He’s in love with analog filmmaking, celluloid, Technicolor and old lenses. And yet he has this youthful energy and a tech-savvy brain that’s all about finding new ways to do things. That epitomizes where I want this movie to live. I’m trying to hark back to certain old traditions but hopefully show you something you haven’t seen before.”

The director screened musicals for the crew to get them into the intended spirit. He cites influences from 1930s-1960s Hollywood, noting, “That tradition of musicals composed directly for the screen — where there’s interplay among music, image, story, character and dance — was magical. La La Land started with this idea of taking that style of storytelling and applying it to a modern setting.”

“Damien wanted to show the blue nights and twilights of Los Angeles — maybe they’re not always like that, but you might remember them that way — and those beautiful old gas-style streetlights from some parts of the city,” Sandgren says. “We also both loved Los Angeles’ grittiness. Lincoln Boulevard might be considered ugly, but we love its telephone poles at magic hour.” He adds that production designer David Wasco, whose L.A. projects include Pulp Fiction, “shared his great knowledge of the city of Los Angeles, and presented his brilliant designs and visions for the sets with great passion, and we had a very tight collaboration on the colors of the film.”

The filmmakers made a concerted effort to shoot just before or after sunset for many exterior shots, such as when Sebastian, high on new love, walks alone on a pier; when the couple strolls together across a bridge; and when, toward the beginning of the film, they dance in the hills overlooking the city.

Though the movie’s retro feeling certainly served as motivation for capturing on film stock, analog is Sandgren’s general preference for his projects. “Film has so many expressive forms,” he says. “When you choose from Super 8mm, 16mm, 35mm and 65mm, you have more variety of looks than by shooting digital and trying to tweak later in post. We all know how little time we have in post, and adding looks at that point is always scary to me. It’s great to capture in camera if you can, and more economical. When we watched the dailies we fell in love with the colors we got and that’s the general look we kept.”