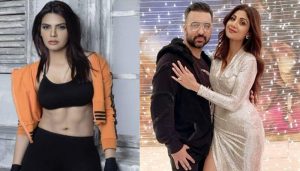 Now, Kundra is in 14 days of judicial custody and new sleazy undertones to the case are unraveling every day.

Raj Kundra is in custody and Shilpa Shetty gets angrier by the minute. Reports say when the house was raided Shilpa Shetty could not control her turbulent emotions and in fury, she had broken down yelling at her husband. She blamed him for ruining the reputation of the family, due to his underhand dealings.

Raj Kundra may be accused in the pornography case, but Shilpa is definitely not ready to carry the baggage. The Shetty Kundra family has undergone raids and fines to pay for Raj Kundra’s wrongdoings. But, Shilpa Shetty has no intention of letting the media get away by ‘doing false reporting & maligning her image’.

Now, she wants justice and has approached the courts for defamatory content published by nearly 29 media persons, media houses, and social media apps against her. Hell hath a woman scorned, Shilpa walks the warpath!