Meezaan recently commented that he is “just” friends with Navya

Navya Naveli Nanda, Amitabh Bachchan’s granddaughter, was often caught on camera cozying up to Meezaan Jafferi. But, here comes the twist in the tale. Meezaan recently cleared the air saying he is “just” friends with Navya. 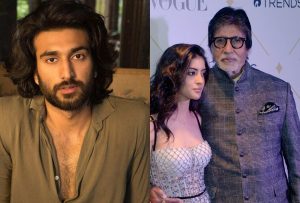 There were cozy moments in plenty between the two, but Meezaan has a different story to say now. He admits that he is just friends with Navya and the rumors of dating Amitabh’s granddaughter Navya Nanda made his going to Jalsa very awkward.

The rumors have been a part of the gossip columns for a long time, though this is probably the first time Meezaan has opened up about his relationship with Bachchan’s granddaughter. Talking about it, he says, “It’s been such a long time since someone asked me about Navya. I was promoting Malaal, it was like boom boom boom, coming my way. But honestly, me and Navya are really close friends and I think because of me, her name has come up in a lot of places and that is unfair. It’s her private life. I don’t want to include any of her family. It’s really unfair to be talking about someone else at this point of time.”

Speculations had gone awry when Navya had wished Meezaan affectionately on her Insta handle. She was seen with Meezan on different occasions, but this brings a new story for Total Filmy to dig into in the future. Stay tuned guys, we will find out more for you.