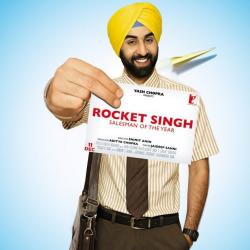 Mumbai, December 10 — The latest movie from the Yash Raj camp, ‘Rocket Singh: Salesman of the Year’, starring Ranbir Kapoor in a Sikh avatar is all set to release this Friday.

Reportedly, the movie has created quite a stir in B-town and everybody is looking forward to watching the ‘Sardarji’ look of the town’s current heartthrob.

The younger Kapoor lad says, “This is a very simple film. It does not have foreign locations or actresses coming out of the sea or cars overturning. It’s about a boy, just out of college, who enters the sales world.”

Rocket Singh promises to be a surprise package
Yash Raj studios have given the industry some great female stars in the past, and they are introducing another debutant yet again in this movie. The female lead is played by Shazahn Padamsee who has been kept under wraps till now and appears in no trailers of the movie.

Gauhar Khan, B-Town’s item girl, is another surprise factor in the film as she appears in a pivotal role.

The movie revolves around the character of Harpreet Singh Bedi played by Ranbir Kapoor who has just graduated with marginal scores and so becomes a salesman.

How he becomes a conman and becomes a successful salesman forms the rest of this comedy movie.

Directed by Shimit Amin of the ‘Chak De’ fame, the movie has been nominated to be screened in the Indian cinema section in the category ‘Out of Competition’ at the film festival.

The makers have not gone for any promotional activities for the movie and this is what Ranbir Kapoor has to say: “Shimit, Jaideep Sahni and Aditya Chopra believe that they have to be honest with the product. They don’t want to over-market the film and make it look like a blockbuster.”