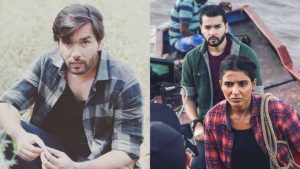 The intense lovelorn and praiseworthy looks Shahab Ali aka Sajid directed towards Samantha Akkineni in the last few scenes of Family Man 2 were one of the highlights of the web series. The incomplete love story set amidst a terror strike made the people mourn the death of the “anti-National” Sajid and also made the character seem “Human”!

Shahab Ali essayed the role of a villain Sajjid, in both seasons of Family Man, but his intense lovelorn looks towards Samantha Akkineni, in the climax scenes of Family Man 2 were a class apart. Manoj Bajpayee or Srikant Tiwari and JK are seen running around unraveling the planned terror strikes modus operandi of the terrorists. But, it is the strange silent and unspoken relation brewing between Samantha and Shahab, amidst the seething vengeance and anger that left the audiences feeling incomplete when he dies.

Talking about his silent on-screen character, Shahab says “I was a little scared how people would accept this negative character. Now I’m getting messages that they might have disliked Sajid, but they loved me.” The evident aggression of Sajid in Family Man 1 slowly gave way to a more menacing but strangely emotional character in Family Man 2.

According to him, “I knew I had given my best to Sajid and expected the audience will like my work. But the response for both seasons two and Sajid is overwhelming. The audience is very intelligent. They notice how an actor transforms while performing. I’m also getting calls from people in the industry who I’ve looked upto.” The vengeance and violence may not be justified but strangely people didn’t want him dead. What have you got to say about this?

Amol Parashar’s Tripling 3 up for season 3