It, indeed, is a devastating day for the Hindi film industry as veteran actor Rishi Kapoor died in Mumbai on April 30. He was 67. Rishi Kapoor was born to legendary filmmaker-actor Raj Kapoor and his wife Krishna Raj Kapoor in 1952 in Mumbai. In a career spanning over four decades, Rishi Kapoor starred in iconic films including Bobby, Karz, Chandni and Kabhi Kabhie. 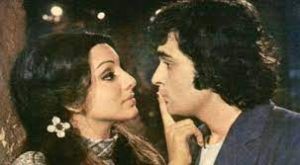 Rishi Kapoor married Neetu Singh in 1980. Theirs was a celebrated Bollywood jodi considering that the magic of Rishi and Neetu was as good on screen as was off it. With Neetu, Rishi Kapoor co-starred in the films Kabhi Kabhie, Amar Akbar Anthony, Doosra Aadmi, Khel Khel Mein, and several other projects.

The veteran actor and Neetu Singh’s love story dates back to 1974 as both were cast opposite each other for the first time in Puttanna Kanagal’s Zehreela Insaan. With Neetu, Rishi Kapoor developed a strong friendship almost instantly as he used to share his secrets and other stories with the actress.

How did love find the couple?

Well, that again, is a filmy story. Rishi Kapoor was shooting outside Mumbai when he realised that he missed his close friend quite a lot. Much more than he would remember a friend. “Yeh sikhni badi yaad aati hai,” Rishi Kapoor wrote in a telegram and sent it to Neetu Singh.

Of course, she was over the moon but her hopes were almost shattered after she was told by the actor that he wasn’t looking at marriage. Nevertheless, Rishi and Neetu began dating in 1975 while he also made it clear to her that, “I will only date you, but never marry you.

But for how long could Rishi Kapoor evade the shaadi question. Ultimately, Rishi Kapoor did marry Neetu – she was 21 and he, 26.

Prior to her wedding, Neetu Singh informed producers that she would not continue with her career in films. Several quarters blamed her decision on the fact that married women from the Kapoor Khaandaan do not work in films but Neetu Singh insisted that she intended to “focus on home and family”.

While Rishi Kapoor and Neetu Singh’s marriage was interrupted by brief turbulences, she refused to give up on their relationship. In Ranbir Kapoor’s words, “I have seen them fight, but my mother is a rock. She is the one who has kept us all together.”

Nevertheless, Neetu Kapoor did return to the film industry after 1983’s Ganga Meri Maa with Love Aaj Kal in 2009 in which she starred opposite Rishi Kapoor. A year later, she appeared in Do Dooni Chaar opposite her husband as well.

After Rishi Kapoor was diagnosed with cancer in 2018 and undergoing treatment in New York, Neetu was by his side at all times and often shared updates on Instagram.

Rishi Kapoor was admitted to HN Reliance Hospital in Mumbai on Wednesday morning, his brother Randhir Kapoor said. The senior returned to India from New York in September 2019 after his cancer treatment.