When a Khan marries a Mathur

Mumbai, July 7: The name Khan carries much baggage as it is often considered synonymous with the name of an anti-agent of a society. Kabir Khan who recently gave his directorial hit, “New York” based on terrorism, discovered the same when he went to a passport office.

He is married to Mini Mathur who is a famous television host. Basking in the glory of New York’s success, Kabir wanted to join his wife in Malaysia for a holiday.

Kabir’s contemplations
“How could a Khan be married to a Mathur?” they asked Kabir at the passport office.

The director says, “It’s hard to believe that in this day and age, I am asked why my wife’s name is Mathur, when mine is Khan.

“Mini’s anchoring a reality show in the Malaysian jungles and I wanted to join her. But at the passport office they say, ‘How can your wife have a different name and that too from another community?’

“I’m used to it. But it’s still shocking to know that such a mindset exists in supposedly cosmopolitan Mumbai.”

All this left him deep in thought.

“On a subjective level, I don’t mind the questions. They don’t take away from my identity. Even today we get invitations for ‘Mr & Mrs Mini Mathur’. 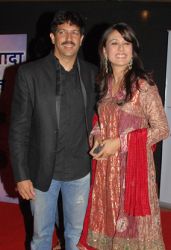 “I don’t mind being known as Kabir Mathur. But the point is that I’m questioned for being a ‘Khan’, and that’s not easy to live with,” he mused.

An incident that left him thinking
As if now the last name, Khan, has not created any problems for him.

But he recalled,“I was accompanying my wife to the US with the Morani brothers. We were flying from LA to Washington just 15 days after 9/11. So the fear and paranoia was not unjustified.

“We were waiting for take off and talking to each other in Hindi when some passengers complained that we were talking in a ‘strange’ language. Within no time, two burly FBI agents came on board and took me and my co-passengers to the front of the plane.

“When they learnt my name, they questioned me for over two hours, googled my name for terrorist links and then finally allowed me to fly. They asked me if I had been to Pakistan. I said ‘no’. If I had told them I had been to Afganistan, they’d have freaked out.”

But the story didn’t end there. He says, “Two other passengers on board refused to fly with us. So they were asked to deplane, the logic being that if my name was cleared, by no means could I be prevented from traveling.

So you see, post-9/11, persecution comes with its inbuilt safety measures.”