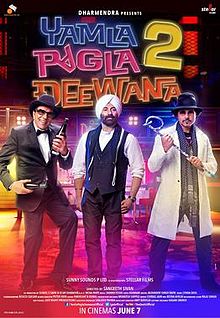 The upcoming film which is the sequel to the 2011 film had won a lot of appreciation for the madcap comedy. The second installment of the crazy comedy is directed by Sangeeth Sivan and the music is composed by a host of music directors Sharib, Toshi and Sachin Gupta.

The music of YPD 2 is embellished with high and strong Punjabi flavor. The entertaining album features five tracks.

Yamla Pagla Deewana
The album starts off with the title number “Yamla Pagla Deewana’. This is a racy track that could have been much better. The song offers good music. Rahul Seth’s rap is fine and the lyrics are fun and humorous to listen. The brilliant vocals behind the song are singers Shankar Mahadevan and Sukwindar Singh and Sanchita Bhattacharya. The song is taken over by the powerful Punjabi flavor that has a typical Bhangara number which is different but not exceptional.

Changli Hai Changli Hai
Mika Singh and Shreya Ghoshal’s ‘Changli Hai Changli Hai’ has the feel of Govinda’s romantic films. The song has a typical touch of Mika which is lively and vibrant with fast beats and whistles. The other aspect that can be noticed from the Marathi touch song is that singer Shreya Ghoshal has sung differently. The singer who is known for her melodious tone has a gone up step further by blending her vocals with the music. The song number has Hinglish lyrics. 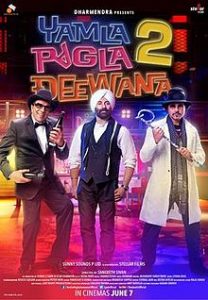 The mood of the track “Main Taan Aida Hi Nachda’ is interesting and invigorating.. Singers Diljit Dosanjh and Sachinn Gupta along with the Deols Karan, Sunny, Dharmendra and Bobby have sung the song. The number is effective for the lyrics . The song has been aptly lent by singers Diljit Dosanjh and Sachinn Gupta. It has groovy music while the chorus has been sung by the Deols.

Jat Yamla Pagla Ho Gaya
Mika and Suzzane D`Mello belts out their voice for Jatt yamla pagla ho gaya”. The song seems to be a subsidiary of the title track as its analogous. The use of beats and tune makes it uninteresting. Mika manages to spice it up, and even Suzzane perks it up with her English vocal.

The songs of YOD 2 is fairly joyful and monotonous.

Yamla Pagla Deewana 2 will see the successful return of the Deol family—Dharmendra, Sunny and Bobby.